Why Living in the Caribbean Can Drive You Fricking Insane (And How to Avoid it).

After 5 years of house sitting around the globe, we are in the Caribbean for the 4th year in a row and have a deeper understanding of the acronym ASDIP–

“Another Stupid Day in Paradise”

We are spending 7 months on a small  island in the Grenadines with a population of about 5,000 this year and often quote ASDIP to ourselves.

There is a huge difference between visiting a place for a few weeks – filling your gills full of rum, getting really good sunburn and then heading back home with a bunch of sunset photos.

The reality is that after residing in a place for more than a few months, the honeymoon period grinds to a halt. The relationship with a place loses it freshness, the magic starts to fade and real life kicks in. The camera, more often than not, gets left at home to collect dust (or condensation). The initial rush fades and little things start to piss you off (if you let them).

As a traveler there is always the lure of that next country, the temptation of a fresh relationship with a new place.  It appeals because you haven’t been there yet, you really don’t know much about it. The new place is the seductress – the country that smiles at you from the bar. You imagine it as perfect – inexpensive, everyone is friendly and honest, it’s a land of milk and honey. 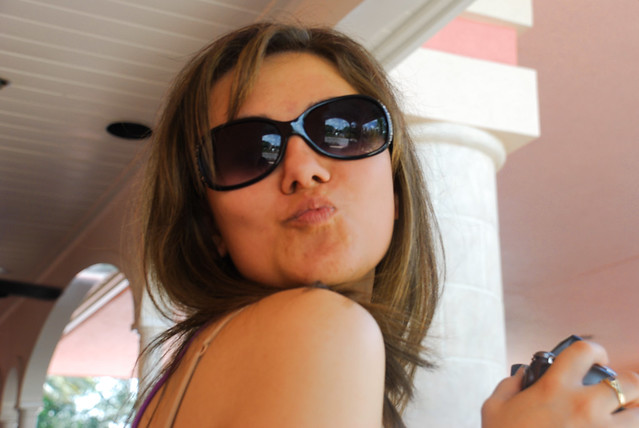 Of course this is complete bullshit. But that doesn’t stop the traveler from fantasizing about it. The place where you are right now is backward and flawed. The country you have not yet explored, holds the promise of being progressive and perfect.

The beauty of traveling ‘slowly’ is that it allows you to stay in a place long enough for it to annoy you. This is when you really learn what makes a place tick. Only once a place gets under your skin,  can you get under it’s.

How does the Caribbean get under my skin, let me count the ways…..

Depending where you are in the Islands, shopping for even the basics can be daunting. There are no Walmart’s, Home Depots or Tim Horton’s down here folks!

Most items imported into the islands are subject to exorbitant import duties ($7.50 US for a bag of Doritos anyone?)

Even the local produce can be a challenge – like the ‘local’ lettuce that would benefit from being boiled to make it edible.

It also drives me crazy (pun not intended) that I cannot get parts for a car which cost $2 in North America. Instead I have to ask friends to send them down. By the time they get here those parts cost $135.

Newsflash! – there are bugs in the Caribbean. Many all-inclusive resorts carpet bomb their facilities with pyrethroid pesticides. In other places, evil blood sucking mosquitos flourish, along with sand flies, regular annoying flies, spiders and other assorted creepy crawly type thingies.

In the past few years Yvonne & I have both come down with the Chikungunya and Zika virus’, neither of which we recommend. The media was all over Zika, like the proverbial fat kid on a smarty. The cynic in me thinks an image of a baby with a shrunken head translates into advertising revenue for the media. However based on personal experience  Chikungunya was a way more evil illness -NASTY! The Weather Can Be Nasty

Holy crap the tropics are hot! In the summer months when the trade winds die down it is fricken hot! If you don’t like sweating, you won’t like it here.

With all that hot weather comes storm season. From the beginning of June until the end of November, weather watching is a spectator sport. In the background there is always the underlying tension, the fear that a storm will come and dump a few feet of rain on you and wash you away into de sea, or worse a hurricane will blow the roof off the place then wash you and its contents into de sea

Think the drivers in your neck of the woods are crappy? I invite you to come down to the Caribbean! Combine poor roads, lead footed drivers, with a healthy dose of testosterone and it gets rather interesting.

I have come to the conclusion that the pot holes are always smaller on the other side of the road – especially when there is oncoming traffic involved. Driving here is like one great big game of “chicken” in the world’s largest high school parking lot.

‘Island time’ – is total bullshit when it comes to driving, well almost. It is either full speed ahead, passing around blind corners, or full stop in the middle of the road to have a chat with your friends while you block traffic in both directions.

Not sure why the drivers are so fast on the islands. Some say that driving like a maniac is the only form of excitement for many. Others say that folks are making up for lost time from all of those mid road chats.

Not all driving behaviour is bad here though, I have found the driver’s in the Windward Islands to be very courteous about letting you into traffic or when turning across traffic.

The worst driving behavior is exhibited by the bus drivers. The dollar buses–minivans, also known as land planes in some parts–and the big freakin’ scary Barbados buses that zoom along de narrow coast roads. These guys are a law unto themselves and apparently they do own the road – all of it and use both sides at will! 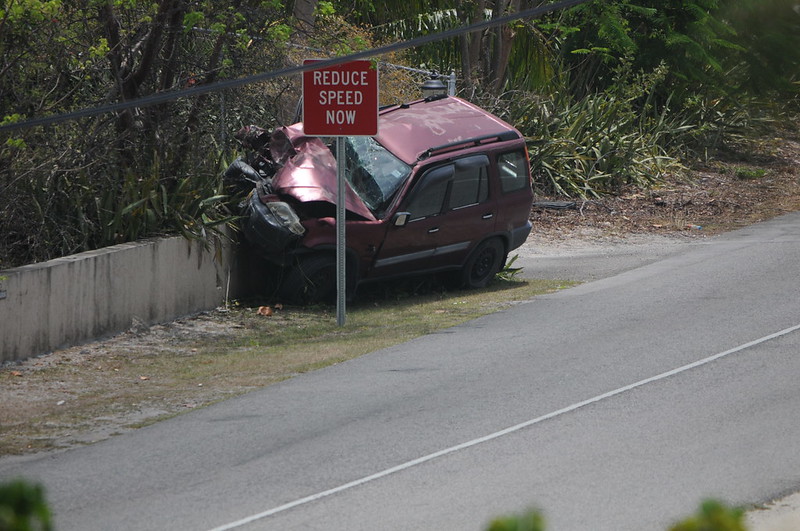 Every six months or so, there is a news story of a dollar van loaded with school children, careening off a cliff into the ocean. Things slow down for a few weeks and gradually speed up again, until the next bus catastrophe.

Why don’t the cops clamp down on these speed demons? Island gossip has it the police own the vans.

Which brings me to the next point.

Living on a small island is exactly the same as living in a small town surrounded by an ocean – everyone knows what you have been up to. You can run but you can’t hide.

Frantz Kafka would be proud (or least feel right at home here). In some of the Islands, government jobs account for about a third of the economy.

With that many people to keep busy, the paper work meanders slowly along a windy often ill-defined path with many stops along the way for a road side chat.

I sometimes think if the islands ran out of paper the whole place would come to a grinding halt!

Would you like a side order of attitude with that?

Coming from North America one is used to a certain level of customer service, it is part of the culture. In the Caribbean ‘service’ can be a bit hit and miss. It  depends on how touristy the island is and how diligent the business owner is.

In some situations you feel like you are inconveniencing people just by sitting down in their establishment, or showing up to board a plane, or going through customs and immigration.

Pleasantries such as please and thank you can be in short supply.   However having someone bark orders at you can be a common occurrence.

This can be a real heart breaker. Animals are not always held with the highest regard in the islands. You can always find stray abandoned dogs wandering the streets having to fend for themselves.

Some consider it a favor to abandon a dog at the dump, the reasoning being that at least the wretched beast has something to eat.

Dogs with homes do not always fare much better. We have witnessed dogs tied to a 4 foot chain for days on end. The only interaction is when someone comes by once a day to yell at it and give it some food and water.

Apparently the Fram man’s influence has not extended down to the Caribbean. Part of the island time philosophy is “If it ain’t broke don’t fix it”, or “It ain’t be getting fixed until it is completely FUBARed!”

There is a telephone pole in front of a property where we house sit, that has been leaning for a year, held up only by the trees around it. After multiple phone calls to report it and promises to get it looked at… nothing, nada.

It was not until the sagging line was ripped off the pole by a passing vehicle that anything was done (after the Carnival long weekend had passed of course). The line was restrung – the pole is still propped up by its neighbors.

There are a lot of things in the Caribbean that  make me shake my head on a daily basis.

No matter where you live, “real life” is still there, lurking in the bushes.

North American city life drives me crazy. The edginess, the noise, the big brother cable news network’s invading my space, traffic, hustle, bustle, being anonymous in a sea of people who mostly would rather step on your face than look at it. (I stole that from Ghostbusters).

A Strategy to Maintain Sanity.

My strategy for staying sane in the Caribbean (or anywhere for that matter) involves the following:

Mahatma Gandi was credited with saying

“Be the change you want to see”

My interpretation of this wisdom is to lead by example.

If the packs of stray mangy dogs bother you – volunteer at a spay and neutering clinic.

Stop running against the wind – in my opinion it is way too hot to run here anyways. If you come here with the idea of changing the world and try to force the issue, the ground will shift and swallow you whole.

Realise that nothing has meaning except the meaning you give it. The world is colored by the lenses you wear. What appears wacko to you, is perfectly alright to others.

Not accepting the world around you for what it is and constantly saying “this should be done this way” or “they should do that” is a sure fire way to drive yourself crazy.

I try not to “should” on people, ewew!

Go with the flow and enjoy the slower pace of life here. If people are in such a hurry when driving, pullover, let them by.

Living in the Caribbean will test your patience, it is also a really  good opportunity to chill out. When you think you cannot be any more patient and relaxed you will be tested again.

The Caribbean is the place to perfect chilling out – which is the art of doing nothing without getting bored.

Let your light shine by being genuine. Be quick to smile, most people will mirror your initiative. (Warning don’t attempt this strategy in the cities of the developed nations – you will probably get locked up for  being a nut bar).

Enjoy the weather when the sun shines, enjoy the Caribbean groove and vibe, the vibrant colors, the local food, the music. Enjoy the clear blue sky and ocean, the amazing beaches and the craggy volcanic slopes shrouded in tropic foliage.

ASDIP has two meanings the first is

Another Stupid Day in Paradise.

Another Sunny Day in Paradise.

I absolutely Love living in the Caribbean and I’ll take the boiled lettuce over the big city any day.