Cuba Time – Going with the Flow

Several years ago (while still living and working in Vancouver) we were looking for somewhere warm to take a break from the Rat Race and the grey Vancouver winter for a two week holiday. But where to go?

We toyed with the idea of going to Cuba. This was well before Cuba’s borders were officially open to American citizens. The resorts in Varadero were well known Canadian enclaves (these days you will find probably find more Eastern Europeans).

At the time we really were not interested in an all-inclusive type place, but we did not want to do any hard core independent travel slogging either. In the end we rented a self-catering condo in Maui and had a very relaxing vacation. In was the perfect decision for us at the time and in retrospect we were right to skip Cuba.

Cuba has always been on our travel radar screen and earlier this year (2017) we had some time between house sitting assignments in Ecuador and Mexico. We wanted to stay in the area and only had a couple of weeks. So…………..

We decided to go to Cuba on a whim – we did not do any planning or research – just bought a ticket and booked a Bed and Breakfast (Casa Particular) in Havana. So how did that work out for us?

The first impression of Cuba was going through immigration at the Jose Marti International airport. The immigration official gave me shit for approaching the wicket with my wife Yvonne. As the customs forms were like any other with the declaration one per family and in most places you can approach the immigration official as a family. Apparently not in Cuba.

Once it was my turn the gruff, officious, woman scowled while she reviewed my documents and photographed me. Upon leaving I (proud of my fledgling Spanish) said “Que tena un beun dia” – the officer could not hold her poker face and the real person behind the uniform was revealed with a beaming smile.

My first taste of Cuban Spanish was to say the least ‘confabulating’.  At this point we had spent 3 months in Ecuador, so my ear was in Ecuadorian Spanish mode. Stopping over in Miami also meant that we did not have to take a break from having to function in Spanish.

I was feeling pretty good about my ability to communicate in Spanish – that was until we got into the cab. The Casa Particular we were staying at in Havana had arranged for a car to meet us at the airport. Jesus’s full on Cuban Spanish was no match for my Tarzan Spanish skills.  To my ear, he sounded like he was trying to speak as quickly as possible with a mouth full of marbles. This Spanish was almost void of consonants. Every time I asked ¿Como? he just spoke louder and quicker.

Through the rad – a dad conversation I did get the jist that he really liked my gold chain and was offering to buy it from me. Although at the time I thought he was telling me he had a sore throat. He was also very persistent (maybe it had something to do with the number of ¿Como?s).

Once settled in, we went exploring Havana on foot. At first it was little disorienting, just like walking through a looking glass and going back in time. The abundance of 1950’s vintage American cars, Yank Tanks painted gumball colors were augmented by a fleet of aging Soviet vehicles including Ladas, Moskviches, and Volgas  and Gazs.

The air pollution in Havana was grim – 1950’s vintage cars belching black clouds of 1850’s quality exhaust. Walking down main streets was an assault on your lungs as well as your ears.

Some of the pollution belching cars looked like they had just rolled off the assembly line while others appeared to be one twist of baler wire away the scrap heap. 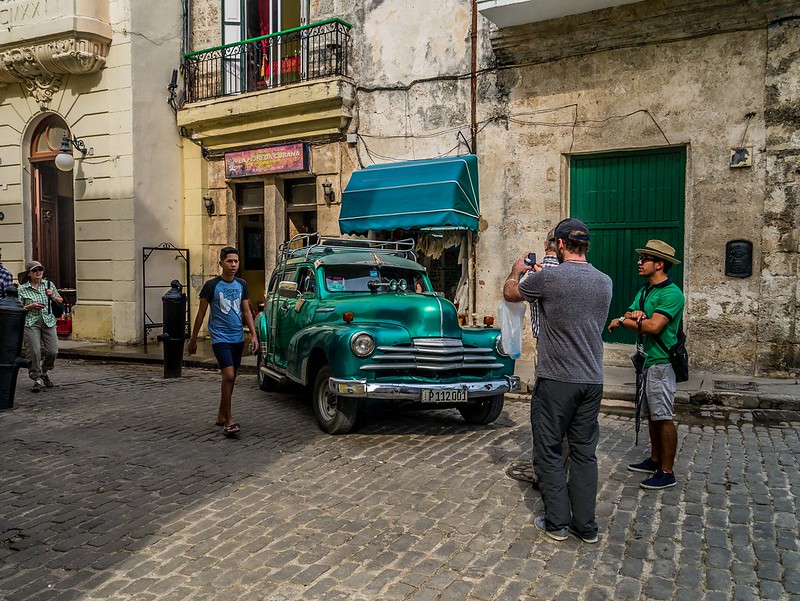 Cuba’s buildings also show the same variation in condition. Some of the elegant, charming buildings were gracefully reaching a ripe old age, while others appeared to be ageing like crack addicted whores. 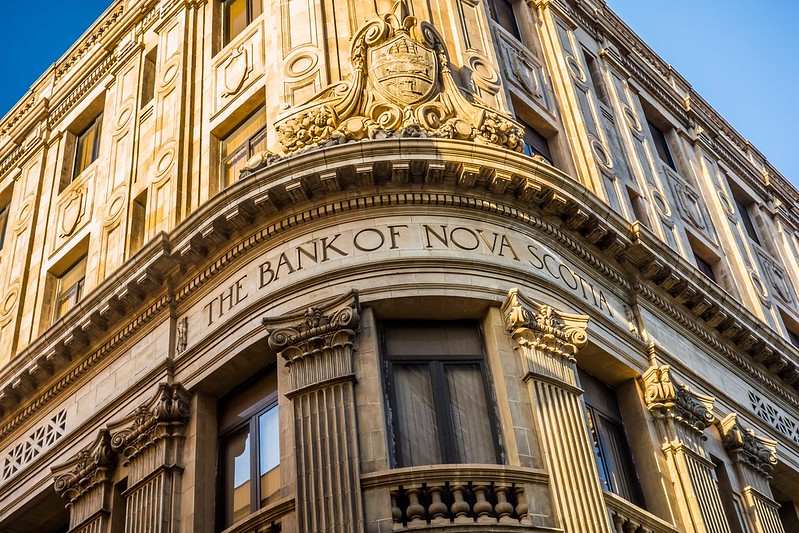 As independent travelers who like to self-cater, we found the lack of shopping options in Havana difficult.  There were no stores per-see – I am not talking about purchasing Gucci or Rolex’s either – just a bottle of water and something to eat was all we were looking for. There were always places offering rum and beer. The stores we did find, had people lined around the block all clutching ration books. When we went inside  (after gazing in puzzlement at all the empty window space) we found out why, there was nothing to offer except a few tins here and there!

I have to admit that there was trepidation about entering these establishment – we were not sure if we needed ration tickets or what currency they would accept.

We were forced to feed ourselves by going to restaurants. I am glad I went to a Cuban restaurant in Miami before we came to Cuba – otherwise I would have left Cuba with the impression that Cuban food consisted of burgers, pasta and pizza or maybe some over boiled vegetables.

Getting cash from ATMs proved to be interesting as well – sometimes they worked and other time Nada! – If you are unfortunate enough to be traveling with a US bank card you were totally shit out of luck. After having mu card rejected by the first ATM I realized how stressful it is when you are cut off from your money supply – your “Bio-survival Tickets”.

For Internet junkies – Cuba is enough to give one the shakes and visions of pink elephants. Internet is existent, it is slow and availability is downright spotty. You can always spot the WIFI hot spot in Cuba, because you will see groups of people on the corner of a street huddled together under the shade, glued to the screens of their handheld devices and laptops. These folks (along with us Gringos) have to buy scratch cards that reveal a code for an hours worth of internet access.

There was also a high coefficient of strangeness about, especially when viewing Cuba through a North American reality tunnel.

There was definitely Voodoo shit going down in Havana. We observed Santeria rituals of offering herbs and roots as well as rubbing rituals where the practitioner uses a sacrificial chicken (or other bird or animal as prescribed by the priest or priestesses known as “Santeros” or “Santeras”). The main idea as, I understand it, is to pass evil from the practitioner to the sacrifice. Once the practitioner was done with the sacrifice it was ceremoniously heaved into the river or the ocean along with the plastic bag it was in. 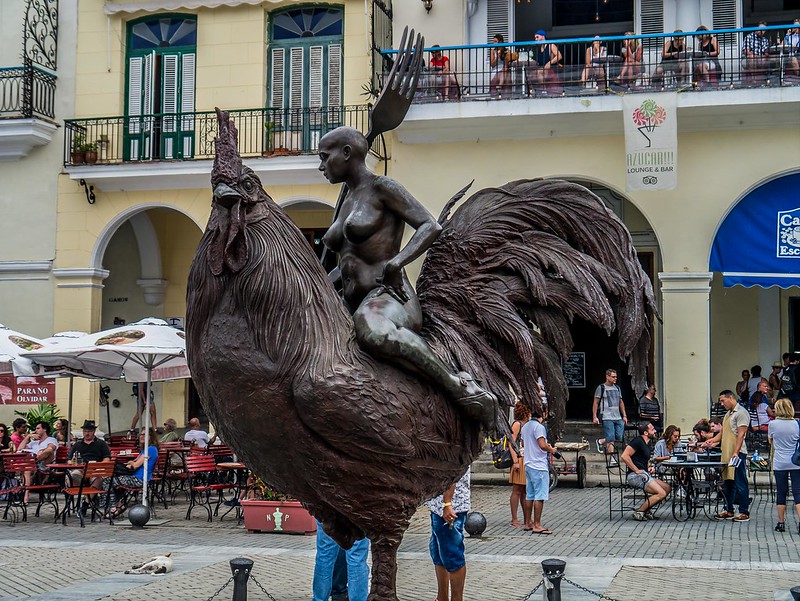 Time has a different meaning in Cuba – not only is there the whole time warp thing going on – there is also the Cuban people’s relationship with time which took some adjusting to.

What we experienced was a kind of “just in time” temporal relationship – a Cuban go with the flow vibe.

Our first experience of this go with the flow thing was at the Casa Particular we were staying at. The wonderful gracious, owner of the Casa said he would help us make arrangements for our onward travels – what he didn’t tell us is he had his own agenda. When we decided to come to Cuba we had been travelling in Ecuador for 3 months and had just finished a tour in the Galapagos which was full on. Our plan was to visit Havana for a while before heading to Varadero for some, sun, surf and some down time.

The owner of the Casa had other plans for us. This mainly involved travelling hallway around Cuba at places he would arrange. Cuba is a big island and we weren’t interested in spending multiple days traveling.

We explained we were not interested in traipsing around the country in the effort to see everything everywhere (like a “normal tourist” maybe?). When we said we just wanted to go to Varadero and he said he would make arrangements for us. One day passed, two days passed, the day before we were to leave (as the Casa was fully booked) we still did not have a place to stay. Not having internet made things even more frustrating.

The lazy go with the flow vibe went on until 8 PM that evening. Sensing our frustration, our host finally got on the phone and after a half hour we he had made arrangements for a roof over our heads for the next two nights. This is yet another story.

Upon leaving the country we felt like we were being held captive by the Cuban laid back approach. We got to the airport 2.5 hours before the US Delta flight was scheduled to leave. We got in line and waited and waited and waited – this line was not going anywhere. A snowstorm in New York and cancelled flights may have had something to do with the situation.

Then again maybe not, as there seemed to be an emphasis for the ticketing agents to give each other kisses on the cheeks engage in warm embraces and catch up with what happened on the weekend. There definitely was no sense of urgency here at all.

By the time we had checked in and checked our bags (which according to all the signage was supposed to be checked in 1 hour before departure) we had 20 minutes before the flight was scheduled to leave and we had not changed our CUCs into a real currency or gone through security.

The line up at the money exchange was also going nowhere quickly – I figured this was a scam to promote spending in the shops. After all if people can’t unload their CUCs before they became worthless paper with pretty ink markings they have to spend it.

We decided to skip the currency exchange and ended up spending our last CUCs on overpriced coffee and chocolate before sitting at the gate. Where once again we Waited and Waited and Waited.

We finally got on the plane and into our seats and we Waited and Waited and Waited – we just hurried up and waited. The Captain finally came on the PA and explained that the delay was because they were waiting for the ground crew to give them baggage weight information before we could depart. It would appear that the folks on the ground were catching up with what happened on the weekend as well.

Before too much longer we were in the air and on our way back to Miami.

Looking out the window, peering at the Florida Keys I realized what I had learned while I was in Cuba. I discovered that inner peace is about accepting things as they are – and just going with the flow.

Oh yeah the final surprise was the email from Delta apologizing to Yvonne for her lost baggage. Which just happened to be sitting in the corner of our room and which of course we never reported missing.

Don’t worry about a thing, ’cause every little thing gonna be all right.

Next post: Exploring the Galapagos on the Mary Anne Part II