Like many a visitor, we had done our research and were expecting to be mobbed by beggars, pickpockets and touts as soon as we left the cruise ship terminal in the port of Cartagena.

This may be why so many visitors decide to stay on the ship all day and never actually step foot in this fascinating city. This was our first opportunity to visit not only another new country but also an entirely new continent, we were determined not to miss it.

Cruise ship guests are often taken advantage of, as the residents know they are there only for a few hours and “have a lot of money”. We had decided against the ships pre-booked, pre-arranged tour itinerary, we wanted to do our own exploring. We disembarked late in the day and were pleasantly surprised by the facilities in the cruise terminal. There is an extensive garden area with semi- tame Macaws, Flamingo’s, Peacocks, Parrots and Hawks. There is also a restaurant, with lots of outdoor seating and a large Wi-Fi area—one hour for $3 US—distinctly preferable to the 85 cents per minute on-board. 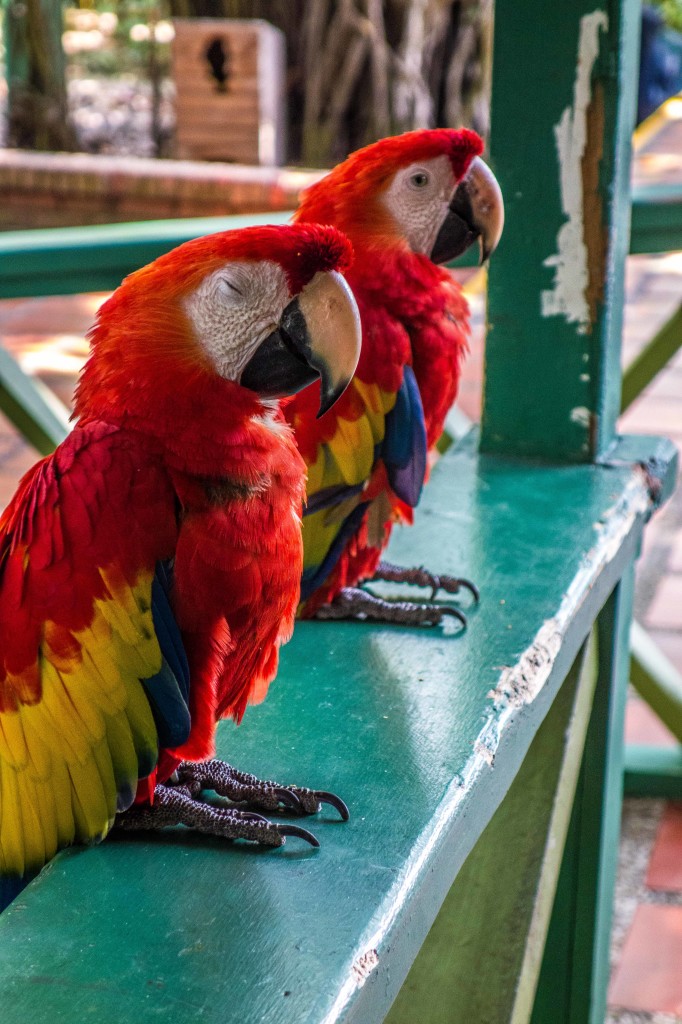 However this delightful oasis was cunningly set up to deliver the unsuspecting tourist right into the arms of the “tour touts”. Follow the exit signs and you will be pounced upon like a hawk hooking a mouse. These guys are very slick, they speak excellent English and want to show you their beautiful city, a 2 hour tour for only US $80. (Bus tours booked onboard were $50 per person).

This is where doing a little homework in advance comes in useful. We had already spoken to the lovely woman at the tourist information desk and had asked what a taxi into the old city should cost, by law they are only supposed to charge $6 from the terminal.

Imagine our surprise when after explaining that we only wanted to go into the old City, these charachters told us that a taxi cost $30 one way! Therefore their tour was such good value………..

After saying no and telling them that we knew it should only be $6, most of them just walked away, waiting for the next, less informed passenger to come along no doubt. Undaunted we retraced our steps and easily found an alternate exit (looks like a taxi drop off point). From here, we easily found the port gate and headed out in search of a taxi.

Shortly after Johnny joined us, a local retired fisherman who makes a little pin money finding taxis for the tourists. With his cut, the taxi ride was $10. This was fine by us; we have spent enough time travelling to know that a stranger seldom gets the same price as a local.

Surprisingly Johnny jumped into the cab with us and exhorted us not to change money on the street, as we “would be robbed and to be very careful”. All calculated to ensure we took him up on his offer to show us around the city at no cost. Although his English was not as perfect as the touts, he directed us to the Simon Bolivar Park, the Inquisition Museum, the carving of a generously proportioned female–serving as a warning to all Cruise ship passengers–then a detour into an Emerald shop before heading up onto the walls surrounding the city.

Strangely, we saw no beggars.  Travel guides and past visitors recount tales of the hordes of beggars that cluster around the turistas, we saw none!

I asked Johnny “where are the beggars?”, his answer–which I have been unable to substantiate–is that “the President did not like the beggars and their monkey business, so he told the police to round them up and then they were killed”.

Hopefully, the solution was not as drastic as Johnny’s version suggests.  During our time there, we did not see a single beggar; there were street vendors, selling hats, leather goods and cold drinks but no beggars. Maybe they were moved out of town and roam the nearby beaches?

Our taxi back to the boat was another $10 and with a tip to Johnny our own personal walking tour of old Cartagena cost only $25 and a little ingenuity. It was worth the time and the money to see this fascinating city with its colonial architecture and ancient walls, sharply contrasting with the  sprouting towers of modern Cartagena.

Lessons learnt— Do your research beforehand and be willing to explore even if the reputation is a little unsavory, you may be pleasantly surprised.